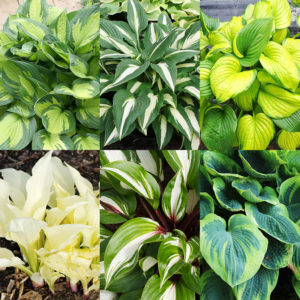 Guide to Gardening with Hosta

Hosta plants are top perennials in terms of popularity as well as ease of growing. The average gardener will easily be able to recognize a hosta in a perennial garden. Known for their foliage which helps add color and texture to shade gardens, hosta’s are a staple in low light garden areas. While they are easy to grow you may have some questions about planting hosta in your garden. I am here to help ensure you get the most out of the shade-loving foliage plant known as Hosta.

Who Should Plant Hosta?

Anyone who wants to add color and texture to a shaded or partially shaded garden area. Hosta are easy to grow and adored by beginner gardeners as well as garden aficionados.

Where Should I plant Hosta?

Hostas are best grown in shade to partially shaded areas. Hosta can be grown at the base of a tree to create a complete look. Hosta can be grown on the north side of your house where there is little sun. Eastern exposures are also a good location to plant hosta as they do well in morning sun. If your property has a substantial amount of mature trees that provide dappled shade, hosta will grow well here too!

Hosta aren’t too fussy about the soil they are planted in. The soil should be moist; however, it should also have good drainage. 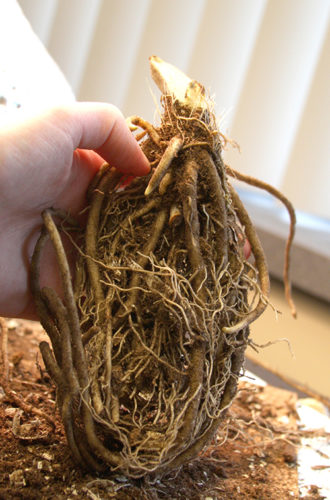 When is the Best Time to Plant Hosta?

Online garden retailers like Holland Bulb Farms and Tulip World sell hostas that are grown from a bare root. A bare root is the dormant root portion of the plant. Bare root perennials such as bare root hosta are best planted in spring and early summer.

Hosta that are growing in a pot that you purchase at a garden center can be planted in spring, summer or early fall.

How do I plant bare root Hosta?

When planting hosta from a bare root you will want to plant the root 1-2” deep. The crown of the plant which is where all the roots come together, and growth comes out of should be at the surface level or slightly above.

Can I grow hosta in a patio planter or container?

You don’t have to limit your hosta planting to the ground; hosta make a lovely filler plant in a shady patio planter. If you are using hosta in a container and live in a colder climate you will want to plant the hosta in the ground before winter. 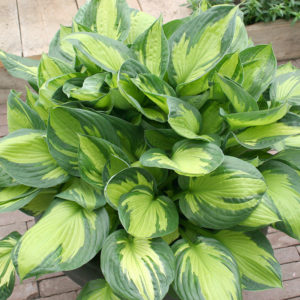 Why are there holes in my hosta leaves?

As mentioned above hosta are easy to grow. That does not mean they are problem-free; they are after all a living plant. The most common problem gardeners have with hosta is slugs chewing and tearing through the leaves. If you notice several holes in your hosta slugs are to blame.

Slugs dwell in dark, damp areas which is where most hosta are planted. Certain types of hosta are more resistant to damage by slugs. Hosta such as Abiqua Drinking Gourd Hosta and Beach Boy Hosta have thicker leaves, heavier ribbing in the leaves and therefore, tend to suffer less damage.

If you have a problem with slugs chewing on your hosta leaves there are a couple of things you can do. You can use a product like Sluggo that is environmentally safe, and easy to apply to your garden beds.  It works by killing slugs as they traverse through the areas you have applied Sluggo. 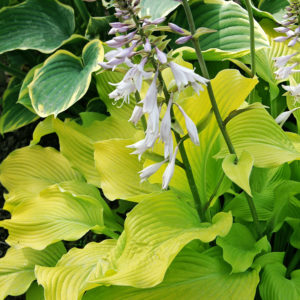 Are there hosta that grow in Full Sun?

While hosta do grow best in shady garden areas there are some varieties that tolerate sun better than others. Varieties like Sun Power Hosta are known to tolerate the sun better than others. If you decide to plant hosta in the sun know that the color of the foliage may differ than if they were in the shade. In addition to the foliage color being different hosta in the sun may require more frequent water to help prevent sun damage.

How to Stop Deer from Eating my Hosta?

Other than slugs the second most common problem gardeners face when growing hosta is deer munching on the leaves. The best way to prevent deer from eating your hosta is to use a deer repellant like Liquid Fence. Apply liquid fence to leaves of the hosta as well as the soil around where the hosta are planted.

How to Care for Hosta in the fall?

Hosta go dormant in winter. In fall when your first hard frost occurs you will notice the leaves of hosta turn yellow and wither. When cleaning up your yard in fall you can cut the leaves back to the ground level. Adding mulch for winter protection is beneficial if you are in a cold or fluctuating climate; however, it is not necessary for these resilient perennials. 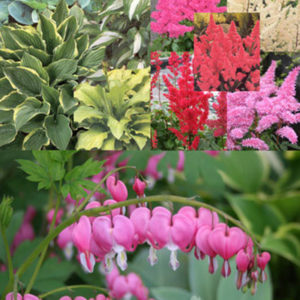 What are other perennials I can plant with Hosta?

Shade-loving perennials pair well with hosta. Planting foliage plants like hosta with flowering perennials will add interest and balance to your garden.

Chocoholic Snakeroot is a shade-loving perennial with delicate purple foliage. It can be used as a tall accent in your garden. Color Festival Hosta has green foliage with golden centers and makes a great companion for Chocoholic Snake Root.

Astilbe have fine delicate foliage and thrive in shade to part shade area. Astilbe are known for their showy plume-like flowers in red, pink, purple and white. The delicate foliage paired with the bold leaves of hosta like Big Daddy Hosta add dimension to your shaded garden areas.

Add Color and Texture to Your Shade Garden with Hosta

It is a common complaint among people with shaded yards that they don’t know what to plant. The lack of sun does limit your options of what you can plant. However, adding hosta to the shaded areas is an easy way to add some curb appeal. Hosta can be planted with the perennials mentioned above.

Plant hosta under your shade trees for tree shoes. Add hosta to the base of shrubs like lilacs and viburnum. You can even create an entire garden using different types of hosta. Since there are over 500 varieties of hosta all with different sized leaves, growth habits and foliage colors the possibilities for a shade garden full of interest are endless.