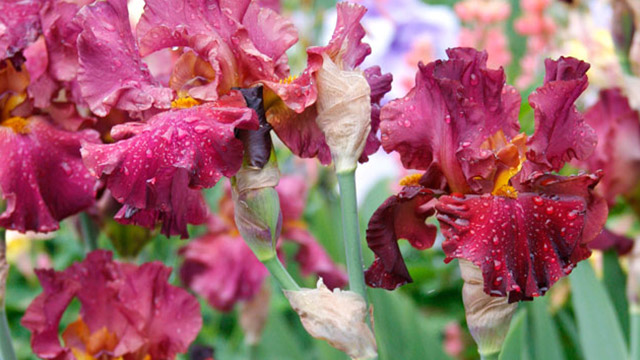 Believe it or not, August has arrived. And as true as it is that there could still be some good summer weeks left in the weather (depending on where you’re located), some gardeners thoughts have started turning in more of a fall direction. I stopped by Holland Bulb Farms yesterday and could hardly believe it when they told me they were anticipating the arrival of their bearded iris inventory within the next week or so — then I glanced at the calendar. Being the first of the fall bulbs to show up on their docks, the arrival of bearded iris rhizomes always marks the beginning of the fall planting season. But you may be wondering: why do they receive them from their supplier so early?

Bearded Iris bulbs (technically termed “rhizomes”) are harvested in July, when the plant is still green but the flowering process has long-since finished. The foliage is cut down within a few inches of the rhizomes at this time and the entire root system along with the remaining foliage is allowed to dry out. Therefore, the short “fan” of foliage remaining will soon be brown and dead — this is a completely normal and natural process as the rhizome enters its dormant state.

Bearded Iris are one of the few fall-planted bulbs that requires a firm root establishment prior to the onset of frost. Therefore, it is important that they are placed in the ground at least 4-6 weeks prior to the first hard freeze. If you’re unsure of when this will be in your area (here in the Upper Midwest we can have freezing temperatures as early as October or sometimes not until after Christmas), err on the side of caution and plant early — there really isn’t such a thing as a “too established” plant, as long as you’re not planting them when the summer weather is still blazing hot. The months of August and September are ideal which is why many bulb companies will ship orders containing only bearded iris early in the fall or even late summer. In fact, Holland Bulb Farms is planning on beginning to ship all orders of this nature by the end of next week already!

Bearded Iris benefit from large amounts of sun, as well as a relatively dry root system. Therefore, you will want to choose a planting location that receives at least 6 hours of sun per day (less than this may result in a lack of blooms) and has soil that is well-drained. If your soil tends to be clay-like at all or retain moisture for long periods of time (a puddle remains longer than 24 hours after a good rainfall), be sure to amend it by mixing in a fair amount of peat moss and compost manure. An excess of moisture will cause rhizomes to rot, making it impossible for them to put down adequate root systems and therefore, grow to their full maturity.

Place the rhizome so that the “fans” (the remaining previous season’s growth) stick up out of the soil and the roots are spread downward. Gently cover the rhizome with a thin layer of soil so that it is just covered — planting too deep will result in excess moisture which, as I mentioned before, is extremely detrimental to the overall health and success of the plant. Provide a light watering so that the soil is evenly moist, but not wet. The “fans” of the previous spring’s growth will most likely be dried and beginning to brown when the rhizomes arrive — this is completely normal as this growth will slowly fade away to make room for new growth next spring. Hold the rhizome at a depth just below the soil surface, standing as upright as possible with the roots splayed out in all directions, pointing slightly downward. Cover the roots with just a thin layer of soil and lightly pack it down around the base of the rhizome so that it continues to remain upright with “fans” pointing towards the sky. Once the rhizome is in place and the hole has been backfilled, offer a light watering and let the roots do their thing!

It is best to wait until after the plant is done blooming to fertilize — this will help the plant to produce food for the rhizome so that next season’s display will be even bigger and better! If you are growing re-blooming iris, this means waiting until after the second bloom has faded. Allow the foliage to complete its process, in which it will turn brown and dry by the time fall arrives. Once this has occurred, cut the foliage down within 4-6″ of the soil surface to rest for next spring. If desired, fertilizer can be applied once more in early spring, when growth first starts to appear.

I always have somewhat mixed feeling about the summer season coming to an end and welcoming in the fall months, but having these beauties to select and plant make it all the more bearable! As I mentioned above, most companies begin shipping their rhizomes very soon so time is of the essence! Holland Bulb Farms actually redid their bearded iris program this fall to include more of the up and coming varieties which are sure to be show-stopping in the late spring garden next year! The photos they’ve included were all taken by their own in-house photographer on a trip to Oregon during the iris blooming season. You can read more about the adventure here – I have to admit, I’m a bit jealous 😉